France Football have revealed the results of the Ballon d’Or 2017 yesterday in a cermony held in Paris where Ronaldo was crownded the best in the world in 2017, Messi came second and was leading Neymar and Buffon who came third and fourth.

France Football have revealed the results of the Ballon d’Or 2017 yesterday in a cermony held in Paris where Ronaldo was crownded the best in the world in 2017, Messi came second and was leading Neymar and Buffon who came third and fourth.

Consistent and steam gaining, the 2020 edition of the Tropical Amissa Bongo cycling tour is already making headlines since the kick off on January 20th in Gabon.

Consistent and steam gaining, the 2020 edition of the Tropical Amissa Bongo cycling tour is already making headlines since the kick off on January 20th.

Algerian cyclist Youcef Reguigui was ranked second in the second stage after pedalling for 120 km between Bitam and Oyem.

190 km. from Lambaréné to Mouila. Cameroonian Kamzong Abessolo makes history as the first Central African cyclist to win a stage at the Tropical Amissa Bongo.

He led the whole race in a breakaway with three other riders including a Burkinabe ( Nikiema Abdoulaziz), a Moroccan ( Sabbahi Rl Houcaine) and the Rwandan Joseph Areruya. After a sprint at the end, it took the photo Finish to separate the Cameroonian and the Rwandan.

Today Friday January 24 will cover the lap between Lambaréné and Kango, followed by the Port Gentil circuit on Saturday before the final lap to Libreville on Sunday January 26.

Top rated games coming your way this weekend on the continent as the final sprint of the inter club competitions will produce candidates for the knock out rounds in the CAF competitions 2020.

The champions league teams will pour it all to join TP Mazembe and Mamelodi Sundowns, the only two to have qualified from the group stages.

And also we will be having some interesting games in the Congolese topflight this weekend. It is the last day of play in the championship as Otyo Oyo fc will be crowned champions.

On Monday we will be bringing you updates from Equatorial Guinea, Mali, Zimbabwe and all that will make news in football here in Congo this weekend on football planet.

That’s a relatively good draw for both Egypt and Senegal, with no obvious threats to them progressing to the final stage of qualifying for Qatar.

Cameroon and Ivory Coast were drawn in the same World Cup qualifying group on Tuesday, meaning one of the African soccer powers won’t make the 2022 tournament in Qatar.

Mohamed Salah’s Egypt will face Gabon and star striker Pierre-Emerick Aubayemang, along with Libya and Angola in Group F.

Sadio Mane’s Senegal, the top-ranked team in Africa, is up against Republic of Congo, Namibia and Togo in Group H.

That’s a relatively good draw for both Egypt and Senegal, with no obvious threats to them progressing to the final stage of qualifying for Qatar.

In Group E, Kenya was drawn with Mali, Uganda, and Rwanda. That makes three East African nations against the Group top seed Mali. If Mali fails to top the group, it means an East African country will be in the running for the final knockout stage.

African champion Algeria is in Group A with Burkina Faso, Niger and Djibouti and hopes its Riyad Mahrez-inspired continental title last year in Egypt can spur it on to the World Cup. Algeria has only qualified for two World Cups since 1986 and its last was in Brazil in 2014.

The first group games are in October and the winners of the 10 groups will be drawn into two-legged playoffs to decide the final five African teams at the World Cup.

Egypt and Senegal both qualified for the last World Cup in Russia and will be looking to repeat. Both Cameroon and Ivory Coast missed out and are up against each other in Group D, which also contains Mozambique and Malawi.

Nigeria was drawn with Cape Verde, Central African Republic and Liberia in Group C as it tries to reach a fourth straight World Cup and eighth overall.

Tunisia is top-seeded in Group B and up against Zambia, Mauritania and Equatorial Guinea. Morocco is the favorite in Group I but will face a challenge from Naby Keita’s Guinea. Guinea-Bissau and Sudan are the other teams in that group.

Ghana and South Africa are likely to fight for to spot in Group G, which also includes Zimbabwe and Ethiopia.

The striker replaces Dutchman Memphis Depay, for €4m with a €11.5m purchase option, according to a press release.

Cameroonian striker Karl Toko Ekambi has officially signed with French top tier side, Olympique Lyon. Ekambi is on loan from his club Villarreal to Olympique Lyonnais until the end of the season.

The striker replaces Dutchman Memphis Depay, for €4m with a €11.5m purchase option, according to a press release.

In his initial comments following the deal: Ekambi said: “I’ve already had contact with Lyon and it didn’t happen at that time because I chose to go to Spain.

“But once the opportunity came up, I immediately said yes, because Lyon is one of the two biggest clubs in France and I think that Lyon can’t be refused, because it’s a very big club and I’ve always wanted to play and always dreamed of playing at Lyon.”

He scored 18 times in all competitions for Spanish side Villarreal last quarter. Karl Toko Ekambi will qualify for the Round of 16 of the Champions League with Olympique Lyonnais against Juventus.

Africa’s race to elect representatives for the next World Cup enters the second round with today’s draw. There are forty teams expected to pooled into 10 groups of four after the draw.

The Nile Ritz-Carlton hotel located in Egypt’s capital Cairo hosted the high and mighty in African football when the second-round draw for African World Cup 2022 qualifiers was held on Tuesday, January 21.

Africa’s race to elect representatives for the next World Cup now enters the second-round with today’s draw. Forty teams were pooled into 10 groups of four after the draw. This qualifying phase starts in March 2020 and comes to an end in October 2021. Ten teams will make it after this stage.

For the third and final round, the ten group winners will be drawn into five two-legged knockout ties to be played in November 2021.

The forty teams pooled today comprised – the 14 winners of the first-round of qualifiers. They were joined by the 26 highest African nations in the FIFA/Coca-Cola World Ranking (as of December 2019). Only the section winners advance to the third round and final round. 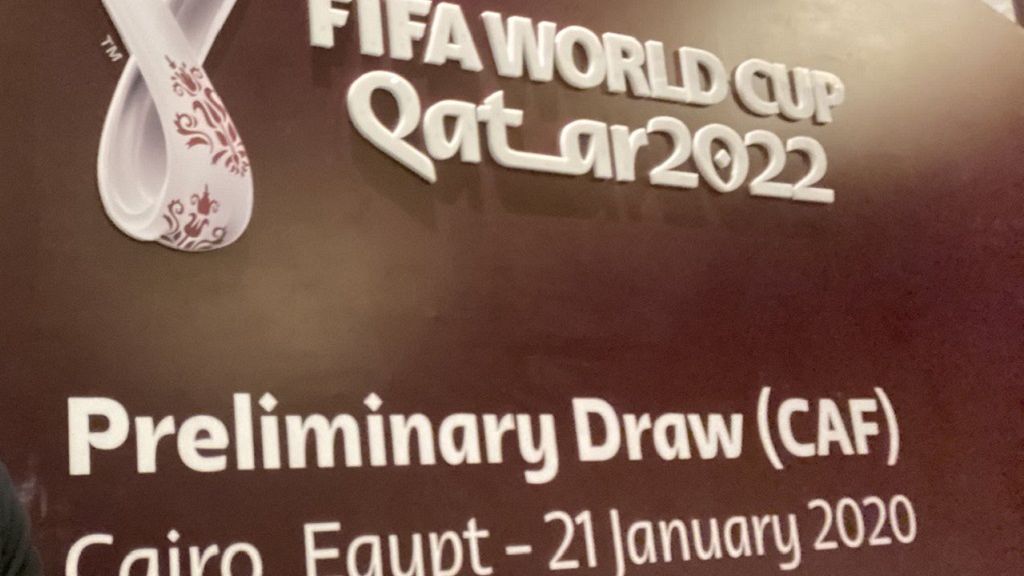 How the groups played out 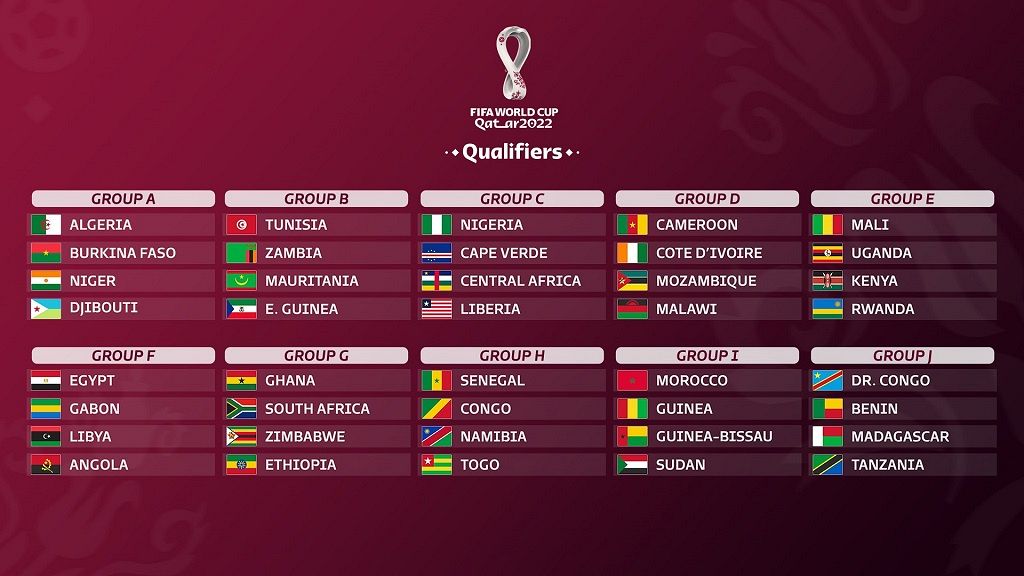 How they shape up: FIFA Analysis of groups

The continent’s big guns line up in Pot 1, among them the five nations that represented Africa at the last FIFA World Cup: Tunisia, Nigeria, Morocco, Egypt and Senegal.

Reigning CAF Africa Cup of Nations champions Algeria are in the hat with them. The Desert Foxes missed out on a place at Russia 2018 and will be anxious to return to the World Cup scene for the first time since Brazil 2014. The same goes for Ghana and Cameroon.

Completing Pot 1 are Congo DR and Mali. The Leopards have not graced the world finals since Germany 1974, when they went by the name of Zaire, while the Eagles have never qualified.

Two sides with World Cup experience figure in Pot 2: the formidable Côte d’Ivoire, who will be led by their fearsome strike duo of Nicolas Pepe and Wilfried Zaha; and South Africa, who have failed to make the big stage since hosting the 2010 tournament, an absence they are keen to end.

Pierre-Emerick Aubameyang’s Gabon and Naby Keita’s Guinea are two ambitious sides that will also pose a threat, despite their record of never having qualified.

Burkina Faso, Uganda, Cape Verde, Benin, Zambia and Congo are also capable of big things and should not be underestimated.

None of the teams in Pot 3 have ever qualified for the biggest tournament in football, though the likes of Madagascar and Mauritania have made significant progress in recent times and look increasingly capable of taking that last step.

Joining them are Namibia, Guinea-Bissau, Mozambique and Zimbabwe, who have all been on the qualification campaign trail for several months now. The quartet emerged from a tricky first round and have designs on going further.

Rounding off the pot are Libya, Niger, Kenya and Central African Republic, who all fancy their chances of causing an upset and making the third round.

The fourth and final pot is an indication of the quality on show in the group phase, containing as it does two previous World Cup qualifiers in Togo and Angola.

Alongside them are teams of the calibre of Tanzania – back in the limelight after appearing at their first Africa Cup of Nations in 40 years – Malawi and Liberia, who respectively knocked out Botswana and Sierra Leone in the last round.

Ethiopia, Rwanda, Sudan, Djibouti and Equatorial Guinea also negotiated the preliminary phase and are aiming to make their presence felt in what promises to be an exciting second round.

President of the Saudi Arabia Football Federation has said he is not concerned by Iran’s threat to boycott the 2020 Asian Champions League (AFC).

Yasser Almisehal said Saudi clubs will be playing as usual.

“The Asian Football Federation assesses the situation in the hosting countries, and the AFC Competitions and Executive Committees make decisions based on that, and when they think the situation is not safe to host matches in some country, they take the necessary measures. Saudi teams are ready to play anywhere. We only focus on our matters and interest. This issue is an internal one, it only concerns Iranians and we don’t want to comment on it”, he said.

Saudi club Al Hilal won the title last year. It was the first time a team from the country had triumphed in Asia’s top club competition since Al-Ittihad triumphed in 2005.

Iran has threatened to boycott the 2020 AFC Champions League if they are banned from hosting international matches.

Close
wpDiscuz
By continuing to use this site, without changing your cookie settings, you agree to the use of cookies enabling us to produce visitor statistics. Find out more.